How To Be Happier Immediately - The Simple Switch

How To Change The Way You View Things To Change Everything

There’s a hard-to-admit-to, somewhat odd, trend happening in the world in 2020.

It’s something that has gotten hold of almost everyone. Looking out into the world as you pass through the airport, or step into an elevator, or even going to the grocery store, it’s addictive nature can’t be missed (and especially now that you’re stuck at home).

Our attention is captured, enraptured and glued to one thing. Our phone.

That magical little device we hold in our hand can summon information, food, rides, entertainment and just about anything else we require, with the tap of a finger. Certainly, it’s quite a beneficial leap forward for humanity. What’s the cost, though?

Well...When’s the last time you allowed yourself to just be bored? Insight often strikes at a time when we are doing nothing. Absent the space of doing nothing, it can be easy to be “addicted to the process of thinking and consuming,” and never opening oneself up to higher levels of insight.

Another cost can simply be that your attention span is now 5 seconds long. If you really evaluate your own behavior...

Can you get through watching a movie, or enjoying dinner, without reaching for that phone?

The purpose of this article is to call attention to something you might be experiencing, and offer a humble recommendation of “a cure.”

There’s no need to play the long game. Or to practice a bit, every single day. You have what you want, when you want it.

The commitment to a practice, or a process, can be the antidote for retraining your brain in the opposite direction.

You can learn to feel fulfilled through the process, rather than the outcome.

And what you can begin to notice, is the beauty of incremental improvement over time.

Gradually, this sort of mindset can bleed into the rest of your life, putting more of a focus on the enjoyment of what you’re doing, and less of a focus on having what you want impulsively and now.

One of the members of our singing bowl family shared her experience of learning a single bowl, over the course of a couple days.

It is a great illustration of what happens when you surrender yourself to the process.

"When I first started out and followed the simple instructions from The Ohm Store, I still found the bowl a bit awkward to hold and play.

The only sound I could get from it was by striking it on the side.

When I tried to hold the bowl and play around the rim way, it didn’t sound good. So I sat the bowl down on a bed table in front of me, and was able to play it that way. I could actually hear it singing with the striker stick circling the edge, but it was not making a pleasant noise.

And this had me convinced for a while that maybe something was wrong with the bowl. So for day one's practice, I played it a little in the only way that I could, on a table, and called it a day. And I took a couple of shots at it later on in the night on the table. For a total of 3 tries on day one.

Now on day two, amazingly, I found that I was able to play it in my hand. Not well, but playing it. Now what happened?

What was the difference between today and yesterday?

The difference was acquaintance. I was a total stranger to the bowl yesterday and more acquainted with it today. So I found that you have to become attuned to the world of sacred sound. The effort you made on the first day isn't forgotten by the other side you're connecting to.

Okay, now on day two I'm playing it by hand, and it still felt awkward. And today, like yesterday, I put in a total of 3 tries and called it a day. Okay, now on day three, I decided to use the ring with the bowl in my hand, with my hand opened, fingers not touching the bowl.

To give it some height that may allow me to circle the striker more smoothly. And to my surprise, I was playing that bowl much much better. In fact, the sound got louder and louder as I was circling, like a symphony, and I started feeling a very strong vibration in my hand that flowed up to my forearm.

The difference, as far as I can see, is an acquaintance.

Each day brings you closer to the realm of sacred sound. And I found the bowl to feel comfortable in my hand with the ring. Well that's all I have to tell you for now. I've been using it for 3 days. It's a great bowl, I love it, and are grateful to have it.

Kudos to the Ohm Store for kicking out a wonderful work of art, and I highly recommend this bowl to everyone. Especially newbies." It doesn’t have to be a singing bowl, but offering yourself to the process of something can open you for insight, true learning and more peace, harmony and happiness in your life. 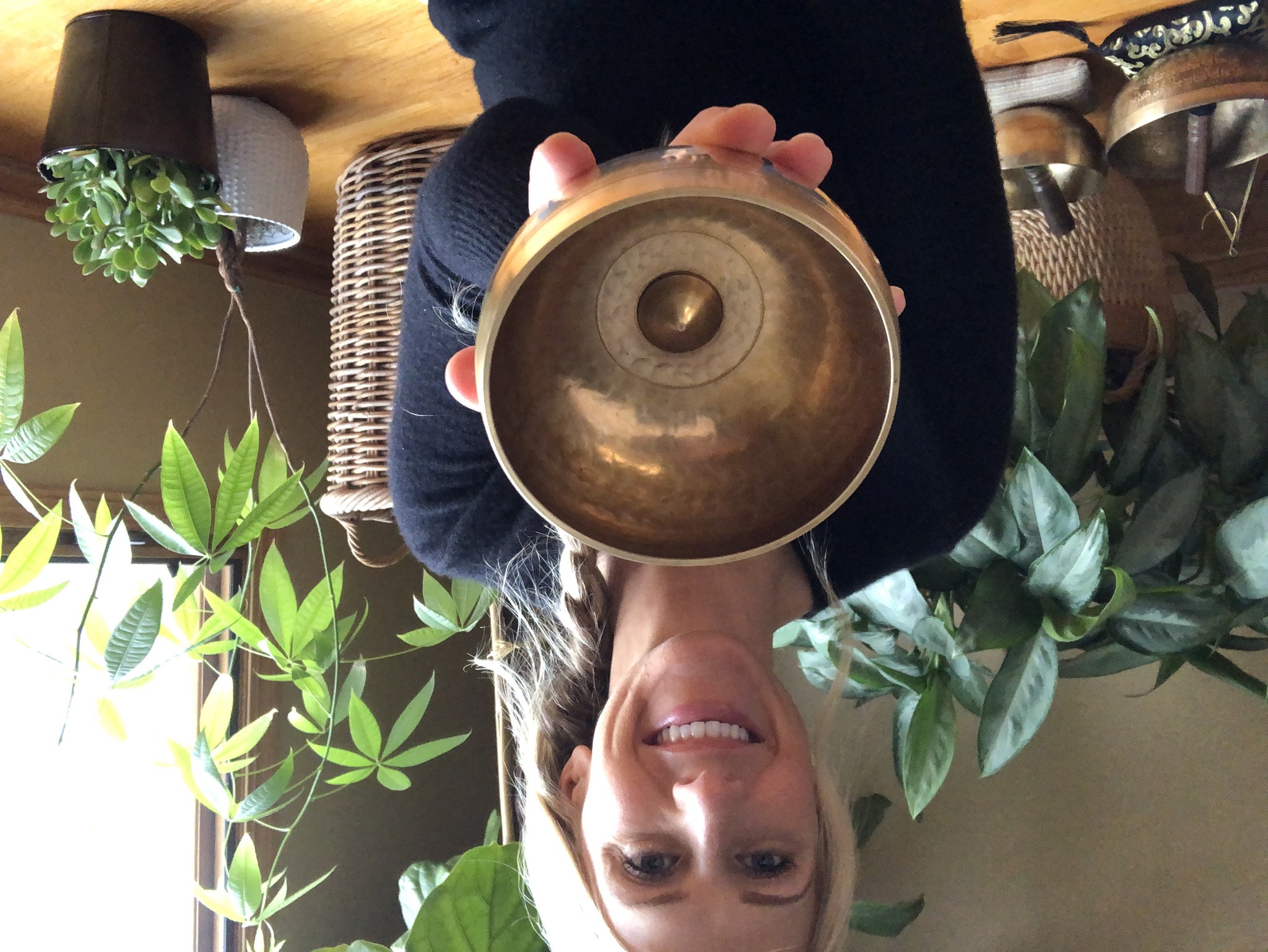 At The Ohm Store, we say that being a slave to a process, makes one the master of your destiny. ” Our line of artisan crafted singing bowls and products can usher a sense of peace into your life.

Ohm Store singing bowls come from 7,000 miles away -- handmade by our partner artisans in Kathmandu, Nepal. Each is crafted specifically for our customers and are designed to last for generations. Brother and Sister, Frank and Nikki Mocerino founded The Ohm Store in 2015 when they partnered with an artisan in Kathmandu, Nepal to bring ancient mindfulness modalities to the modern world.

For eight years leading up to the Ohm Store’s launch, Nikki and Frank experienced a series of escalating physical ailments that ultimately lead to Frank being bedridden for months at a time and Nikki struggling for her own health while supporting her older brother. Their real life experiences of tremendous physical and emotional pain set them down the path of putting their health back together. This journey taught them valuable lessons, which became the foundation of The Ohm Store’s mission and purpose. Through the process of rebuilding ourselves, key themes emerged that became the foundation of The Ohm Store's philosophy.

Physical health is strongly influenced by our emotional and spiritual state. As disease states unfolded, Frank and Nikki were able to trace back each major physical breakdown to emotional and spiritual dysfunction. Simply put, chronic worrying and stress, lack of full self expression, lying, hiding, not meaning what one says or saying what one doesn’t mean can pollute our emotions. Being mentally, emotionally and spiritually unwell was a recipe for physical degradation.

Technology’s promise to connect us can actually lead to real life isolation.  Although we can be in contact with hundreds or even thousands of people through social media, Frank and Nikki got the message that this is not a substitute for real life tribe building. During Frank’s darkest period, the only contact he had with people was through text messages and social media. Isolation and disease caused him to feel unworthy, weak and ashamed, leading to further isolation. It wasn’t until he was no longer able to take care of himself and had to move back into the family home that he realized the healing power of togetherness in real life.

The things we touch, touch us. We are living in a time where gigantic companies are commoditizing everything in the world. As they are pushing for more automation and outsourcing the creation of every product to mass production in factories, we can end up living in a world of soul-less, faceless and potentially worthless items that are made to be cheap rather than last and provide value for generations to come. Frank and Nikki decided to invest in products that passed through the hands of individual artisans, and then made the move to bring these types of products to the world at scale.

Going beyond its purpose as a powerful mindfulness tool, the singing bowl brought Frank and Nikki a sense of connectedness to something bigger. There was something inspiring about practicing a Nepalese mindfulness ritual with a singing bowl that was hand-hammered by someone 7000 miles away. You feel connected to the artisans, real people who put thought and effort into every item they produce. Wanting to share this feeling of connectedness with the world, the siblings began looking for different mindfulness rituals from around the world. Rituals that would help cut through the clutter, technological or otherwise, of life and allow people to enjoy the present moment.

What people are saying about us...

"The most beautiful singing bowl I have ever seen. We are blessed beyond words to be able to purchase this treasure for our home. It will be used daily for guided meditation for our whole family." — Em

Usher A Sense Of Peace Into Your Life.

All Ohm Store products are tailor made for those who are seeking tranquility in a noisy world.

We care about making our products by hand in the traditional way. That's why we make certain that our partner artisans are paid well for their craftsmanship, and why brother-sister Nikki and Frank have a 100% commitment and guarantee on every single order.